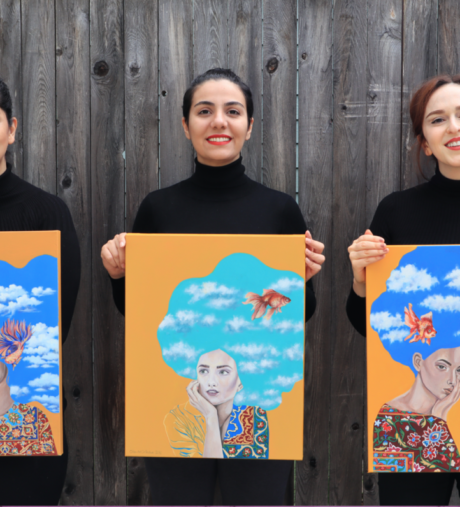 When you migrate, everything in your life changes. From basic things like the language you speak and how you feel, to big issues like your goals and dreams.

We are finding a new “Us” which is strange to ourselves. But based on the new things we are finding out, we started to paint many new series of painting and sculptures, one of them is named “Trace of a Life Left Behind”.

A group of new comers who are carrying their original culture but have vast dreams and ides. Their goals and dreams are the reason they became immigrants. This reason, has an eternal flow in their lives, like a fish swimming in their minds. This fish is not bounded in a pond or pool or even the sea. Like a never-ending horizon, it just swims and swims.


Tell us about yourself. How did you get started?

Olka is a group of four Iranian artists based in Fredericton. The members have experiences in professional visual art work for more than twelve years. This group have worked collectively since 2012. “Olka” means “land”. The reason we chose this name for our group is the idea that your homeland is where you are creating, not where you were born.

Parisa, Ismail, Layla and Tania are the members of the group. Parisa and Tania met when they were studying painting and became friends. Also, the relationship between Ismail and Parisa was shaped at the same time. The friendship between Ismail, Layla and Tania goes back to about twelve years ago. Tania used to visit Parisa in Tabriz, in one of those visits we were doing a public art project and had a strict deadline. We were all engaged with it and she joined us. The result surprised us: it was much better than the work we had done as separate artists. We did a couple of more projects this way: four artists, four different points of view. One united mindset.

All the members, work on each piece collectively. The interesting thing about this group is the extraordinary trust they share. members spend equal (and sometimes unequal) times on each piece but the idea sharing and decision making is done as a group, in complete equality.

Who influences your work?

Since we are living in an inter-connected world where technology links us all, we are able to reach every little news material. Good or bad. We are able to see artwork from all over the world. From well- known artists to new and unknown ones. Just one Instagram post can connect you to the world. These are all the thing that influence us. But our main inspiration is what happens around us.


How do you stay motivated and inspired?

Since the art movements and different art works have fluid natures, if you are not like that you will simply stay out of the zone.  You will get stuck in time and create works that no one actually likes. You should go on with time and always be updated and of course: monitor what your peers and similar artists are doing.

What do you think of the direction of art today?

We think that the art scene these days, is going forward insanely fast because of the internet and social media. Before, an art event could happen anywhere in the world and no one would notice. That’s why it took ten- twenty years for most of the art schools to change. But now all this is happening all together and very fast. You can’t draw borders.

These rapid changes started after WW2, but now thanks to the social media it has gotten much faster. Specially in Instagram which has a very nice and very scary aspect at the same time. The scary one is that the social media presents superficial instructions. A lot of people become “artists” by just knowing about colors or a few techniques. The gap between art and handcrafts is disappearing and this harms art a lot. In Instagram you spend a few seconds on each post and many non-artists are there to just capture you for those short seconds: no depth or concept involved. The nice aspect is that it helps unknown artists share their work with the world.